What lies in store for free agent Michael Chandler?

The Florida-based Michael Chandler has been a key stablemate of Bellator’s roster for almost a decade, earning the lightweight crown a record three times while defeating the likes of Eddie Alvarez and Patricky “Pitbull” Friere in the process.

After dispatching of Benson Henderson in under five minutes, Chandler put the MMA world, and Bellator, on notice, declaring his intentions to test free agency in the post-fight press conference.

“We’ve got some talks to be happening very soon,” he stated, “the future is bright. The phone will be open, and it’ll be a very interesting next couple of weeks.”

Serving as one of the sports premier 155 pounders, the thought of Chandler jumping ship to a promotion such as the UFC is an intriguing one, as there are multiple exciting matchups laying in wait for him.

What is next for Bellator’s most successful lightweight? Continue reading for some possibilities. 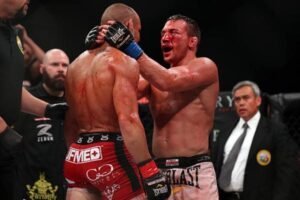 ONE shocked the world back in 2019 when they managed to acquire UFC veterans Eddie Alvarez and Sage Northcutt, who both went on to surprisingly lose their debuts to solid opposition. On top of signing these two free agents, the promotion was able to pick up Demetrious Johnson in a trade deal, who persists as the sport’s greatest ever flyweight athlete.

Upon initial inspection, ONE Championship may seem like a peculiar place for Chandler to further cement his legacy. However, in the eyes of many, it offers the perfect opportunity to do so. While earning a boatload of cash, Chandler would easily be one of the promotions biggest draws alongside his old rival in Alvarez – the pair have fought twice since 2011, and currently hold one victory over one another. A trilogy bout between Chandler and Alvarez has the potential to headline any card ONE stacks together, giving both men the chance to settle the score.

Of course, Alvarez is the obvious choice when considering opponents for Chandler in ONE, yet a few more names have the skillset to press All American Wrestler.

Timofey Nastyukhin – best known for his brutal finish of the aforementioned Alvarez – owns nasty standup skills and undoubtedly possesses the power to challenge the chin of Bellator’s finest lightweight. Asides from a defeat to Saygid Guseyn Arslanaliev in 2018, Nastyukhin has looked rejuvenated in recent times and is riding a wave of momentum since his knockout of the former UFC and Bellator champion; he has yet to compete since this fight.

Despite splashing the cash on two UFC alums, ONE definitely has the facilities and name value to be of interest to “Iron”. Whether the belt, money, or a trilogy draws him to Asia, don’t be surprised if Chandler is announced as their latest signing in the coming weeks. 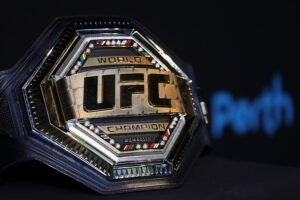 The UFC is doubtlessly the more obvious option out of the two for the 34-year-old Chandler, as becoming a member of their organization will not only expose him to the largest fanbase in the sport but authorize him to face some of best at 155 pounds. Depending on who he would face, one victory inside the Octagon could put him in title contention.

One major issue with the UFC – despite them being the premier mixed martial arts promotion – is that they grossly underpay even their biggest stars. If they are still remotely interested in luring in Chandler, they would have to offer him a contract that heavily outweighs his previous deal with Bellator.

Asides from the business proportion of things, there are various fights in the UFC that would be of great interest to both fans and brass. Personally, I wouldn’t be surprised if they paired him up with Donald “Cowboy” Cerrone or Paul Felder, as both bouts would give Chandler the chance needed to display his overall skillset.

Another route they could venture down is throwing him in against top 6 ranked Dan Hooker, who was recently defeated in a Fight of the Year candidate versus Dustin Poirier. A victory over somebody as violent and respected as Hooker would punch Chandler into the upper echelon of the mainstream, probably placing him one fight away from a championship opportunity.

Fans have been longing to see Bellator’s record-breaker feature inside the Octagon for quite some time, and with 2020 outing itself as the most peculiar year in history, it isn’t too unrealistic to imagine him repping the UFC banner in the not too distant future. 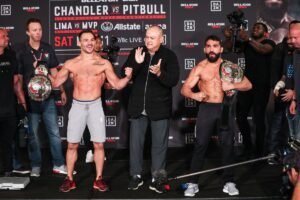 Bellator has been able to keep their golden boy for the best part of a decade and this is no coincidence; maintaining fighter satisfaction is one thing the promotion has been praised for in recent times, therefore the idea of them once more re-signing the American is a rational one.

In spite of running through arguably Bellator’s second-best lightweight, there are a few matchups that both fans and Chandler himself will be eager to run back. The first of which features a certain Pitbull brother.

2019 was a big year for Bellator which saw many high-level title fights take place. One of these titles fights was a champion vs. champion showdown between featherweight powerhouse Patricio “Pitbull” Freire and the lightweight king, Chandler. Pitbull was searching for redemption, as his rival held not one, but two wins over his elder brother; vengeance was served, as he knocked Chandler out at the 1:01 mark of the first round.

Since the unfortunate defeat to Pitbull, Chandler has been trying to rally enough momentum for a rematch, and with two wins now under his belt, the time may have come.

Even if he wasn’t granted an immediate rematch, potential outings against UFC veteran Myles Jury or Adam Piccolotti would be exciting enough contests to garner the attention of Chandler, albeit they wouldn’t do too much for his legacy at this stage.

What do you think is next for Michael Chandler? Leave a comment with your opinion below.

Please confirm you want to block this member.

You will no longer be able to:

Please note: This action will also remove this member from your connections and send a report to the site admin. Please allow a few minutes for this process to complete.